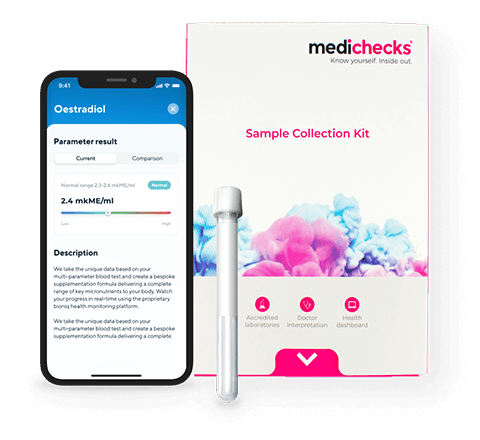 bioniq Women’s Health+ gives you a complete view of your reproductive and thyroid hormones. This test focuses on hormones that regulate the female reproductive system including those which support the life cycle of a healthy egg for ovulation and conception. Hormone balance is important for fertility, as well as your mood, energy, weight and bone health
Learn more 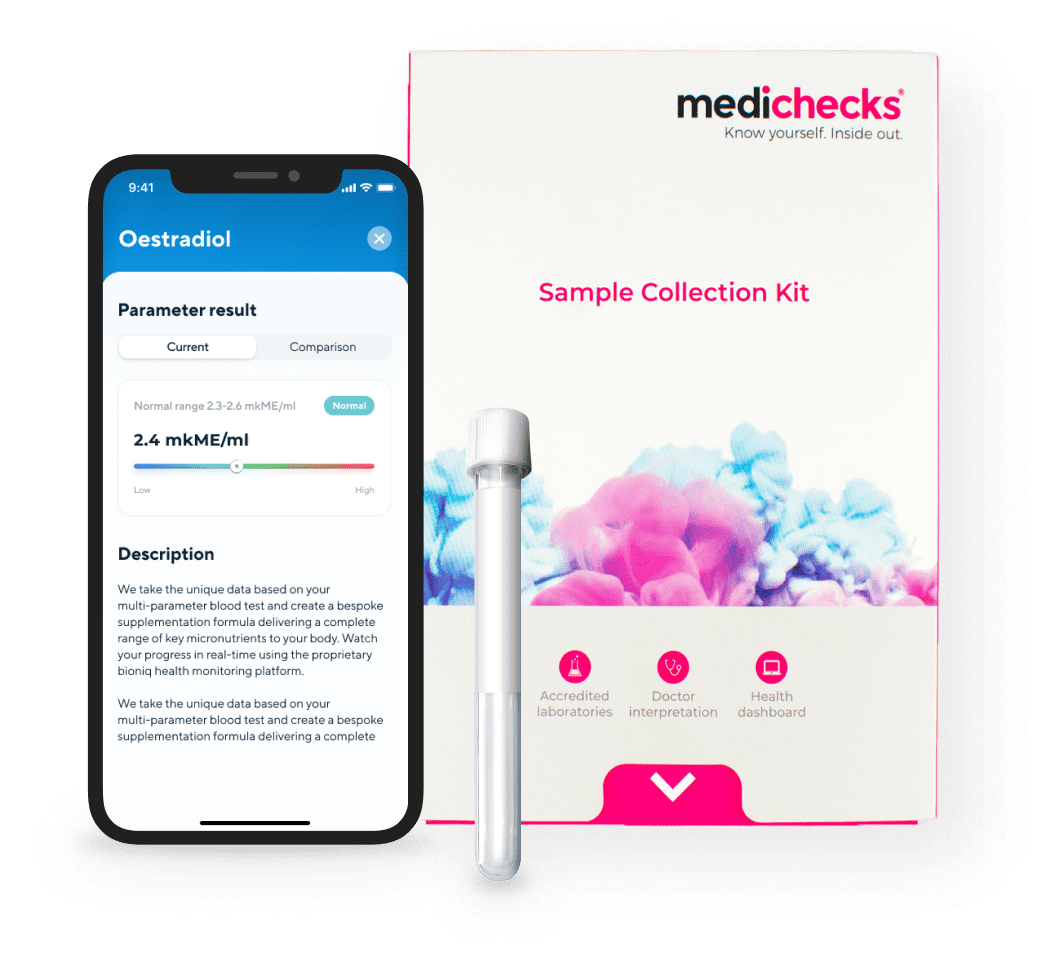 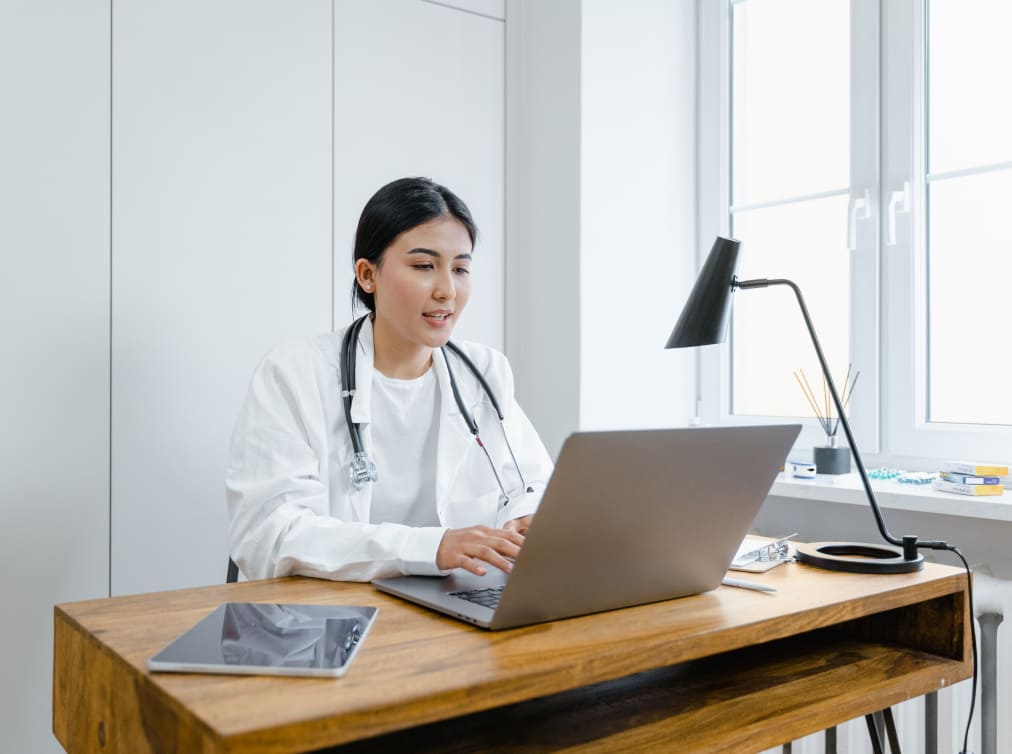 Is this test for me?

If you are planning to start a family, experiencing heavy or irregular periods or want to rule out a thyroid disorder then this test is the right choice for you. Receive a complex analysis of your hormones to see if they are in the optimal range for your age.

Step 1
Choose which blood sampling
options works for you

12 biomarkers for an advanced hormone profile for women including male and female hormones, a full thyroid function test and a look at thyroid antibodies
HormonesProteinsAutoimmunityThyroid hormones

Hormones
Proteins
Thyroid hormones
Thyroid hormones
Hormones (6 Biomarkers)
Hormones govern every activity in your body, from growth and metabolism to reproduction and your sleep cycle. Even a small imbalance in your hormone levels can have a significant impact on your health, affecting your mood and energy levels as well as fertility and libido. Hormones are chemical messengers which are manufactured in your glands and released into your bloodstream. They instruct your body in everything it does – regulating appetite, growth, mood and reproduction. Generally, they keep the body functioning and in balance. Hormone disorders are common and can often be put right through hormone replacement therapy or lifestyle changes. Hormone levels fluctuate throughout the day and also throughout the female reproductive cycle.
• LH

Luteinising Hormone (LH) is produced by the pituitary gland and is important for male and female fertility. It governs the female menstrual cycle, peaking before ovulation, while in male bodies, it stimulates the production of testosterone.

Oestradiol is a female steroid hormone, produced in the ovaries, and to a much lesser extent, in the male testes. It is the strongest of three oestrogens and is responsible for the female reproductive system as well as the growth of breast tissue and bone thickness. In pre-menopause, oestradiol levels vary throughout the monthly cycle, peaking at ovulation. Female oestradiol levels decline with age, culminating with menopause when the ovaries stop producing eggs. Low oestradiol can cause many symptoms associated with menopause, including hot flushes, night sweats and mood swings. Low oestradiol can also cause osteoporosis.

Testosterone is a hormone that causes male characteristics. In male bodies, it helps to regulate the sex drive and has a role in controlling bone mass, fat distribution, muscle mass, strength and the production of red blood cells and sperm. Testosterone is produced in the male testes, and in much smaller amounts, in the female ovaries. Male testosterone levels naturally decline after the age of 30, although lower-than-normal levels can occur at any age, causing low libido, erectile dysfunction, difficulty in gaining and maintaining muscle mass, and lack of energy. Although female bodies have much lower amounts of testosterone, it is important for many of the same reasons, playing a role in libido, the distribution of muscle and fat and the formation of red blood cells. All laboratories will slightly differ in the reference ranges they apply because they are based on the population they are testing. The normal range is set so that 95% of men will fall into it. For greater consistency, we use the guidance from the British Society for Sexual Medicine (BSSM) which advises that low testosterone can be diagnosed when levels are consistently below 8 nmol/L and that levels below 12 nmol/L could also be considered low, especially in men who also report symptoms of low testosterone, or who have low levels of free testosterone.

Follicle Stimulating Hormone (FSH) is produced in the pituitary gland and is important for the production of eggs by the ovaries and the production of sperm by the testes. In the first half of the menstrual cycle, FSH stimulates the enlargement of the follicles in the ovaries. Each of these follicles will help to increase oestradiol levels. One follicle will become dominant and will be released by the ovary (ovulation), after which follicle-stimulating hormone levels drop during the second half of the menstrual cycle. In male bodies, FSH acts on the seminiferous tubules of the testes where it stimulates immature sperm cells to develop into mature sperm.

Prolactin is a hormone which is produced in the pituitary gland and plays a role in reproductive health. Its primary purpose is to stimulate milk production after childbirth, therefore during pregnancy and breastfeeding, prolactin levels can soar.

Proteins (1 Biomarker)
Proteins are vital to the functioning of cells and tissues as well as for building muscle. Proteins in the blood are measured to help diagnose liver or kidney disease as well as other conditions. Proteins also carry other molecules around the blood (e.g. hormones) so are often measured to help calculate how much of a particular hormone is bound to protein or free and therefore available to your cells. Raised proteins are often caused by dehydration but can also indicate other conditions. Low proteins can indicate severe malnutrition or malabsorption.
• SHBG

Most of the sex hormones - testosterone, oestrogen and dihydrotestosterone (DHT) - found in your blood are bound to Sex Hormone Binding Globulin (SHBG) which means that they are unavailable to your cells. Measuring the level of SHBG in your blood gives important information about your levels of free or unbound hormones which are biologically active and available for use.

Autoimmunity (2 Biomarkers)
Autoimmunity occurs when your body's immune system mistakes your own cells or tissues as being  "foreign" and starts attacking them. There are a number of autoimmune diseases which are defined by which parts of your body are under attack. Common autoimmune conditions include thyroid disease (Hashimoto's Thyroiditis and Graves' Disease), systemic lupus erythematosus (lupus) and rheumatoid arthritis. No one knows what triggers an autoimmune condition but it is well documented that more women than men are affected, and that your risk of developing an autoimmune condition is higher if a family member is affected, or if you have already been diagnosed with another autoimmune condition. Autoimmune disease can cause a wide range of symptoms which can either flare up from time to time with periods of remission, or remain present constantly. The symptoms vary according to the bodily systems affected by the disease. In some cases the tissue affected is very specific, e.g. the thyroid in Hashimoto's thyroiditis, whilst other diseases affect a wide range of body tissues, e.g. lupus.
• Thyroglobulin Antibodies

Thyroid hormones (3 Biomarkers)
Your thyroid is a gland in the front of your neck which produces hormones which help to govern your metabolism. It is possible for your thyroid to under-produce or over-produce thyroid hormones, and both conditions can lead to debilitating symptoms. Typically an underactive thyroid leads to symptoms of lethargy, weight gain and dry skin and hair while an overactive thyroid leads to symptoms of feeling nervous and anxious, as well as weight loss. Once diagnosed, thyroid conditions can be treated but even then it is important to continue to monitor levels of thyroid hormones to ensure that your levels remain optimal.
• Free Thyroxine

Thyroxine (T4) is one of two hormones produced by the thyroid gland. It works to speed up the rate of your metabolism. Most T4 is bound to carrier proteins in the blood, but it is only the free, or unbound T4 that is active in the body, which is measured in this test.

Triiodothyronine (T3) is the more active of the two thyroid hormones produced by the thyroid gland. Most T3 is bound to protein in the blood. Free T3 measures the level of T3 that is free, or unbound to protein, and is available to regulate metabolism.

The thyroid is a gland at the base of your neck responsible for a number of metabolic processes, including energy expenditure, cardiac function, muscle physiology and substrate turnover. Disturbances in your thyroid function can lead to excess hormone levels (overactive) or diminished levels (underactive), both of which can lead to a decrease in athletic performance.Thyroid Stimulating Hormone (TSH) is produced by the pituitary gland and stimulates the thyroid gland to produce the two thyroid hormones thyroxine (T4) and triiodothyronine (T3).Thyroid hormone production is part of a neuroendocrine cascade. It starts in the hypothalamus with the release of thyrotropin releasing hormone (TRH), which triggers the pituitary gland to produce thyroid stimulating hormone (TSH). This binds to cells in the thyroid gland to release the hormones T3 and T4 (thyroxine). T4 is also converted into T3 (the more active thyroid hormone) at peripheral tissues. It is these hormones which essentially control the metabolism around your body. All these levels are normally held in tight balance through negative feedback loops. Abnormal thyroid function can manifest by over-secretion or under-secreting the thyroid hormones. Very often there is an autoimmune component to these conditions and we can often see this by looking at your thyroid antibodies in more advanced thyroid tests.

Thank you! Your submission has been received!
Oops! Something went wrong while submitting the form.
100% DATA PRIVACY

Neither bioniq, nor our partnering clinics (Medichecks), have the right to disclose your health data to a third party. Your results are only accessible to you when you log in to our app or dashboard to track and monitor your progress. For more information about the storing of your digital data, please visit our Privacy Policy page.

Our medical experts do ongoing research to better our products and services. Our credibility and expertise can be viewed in our research papers that are continuously published in peer-reviewed journals. 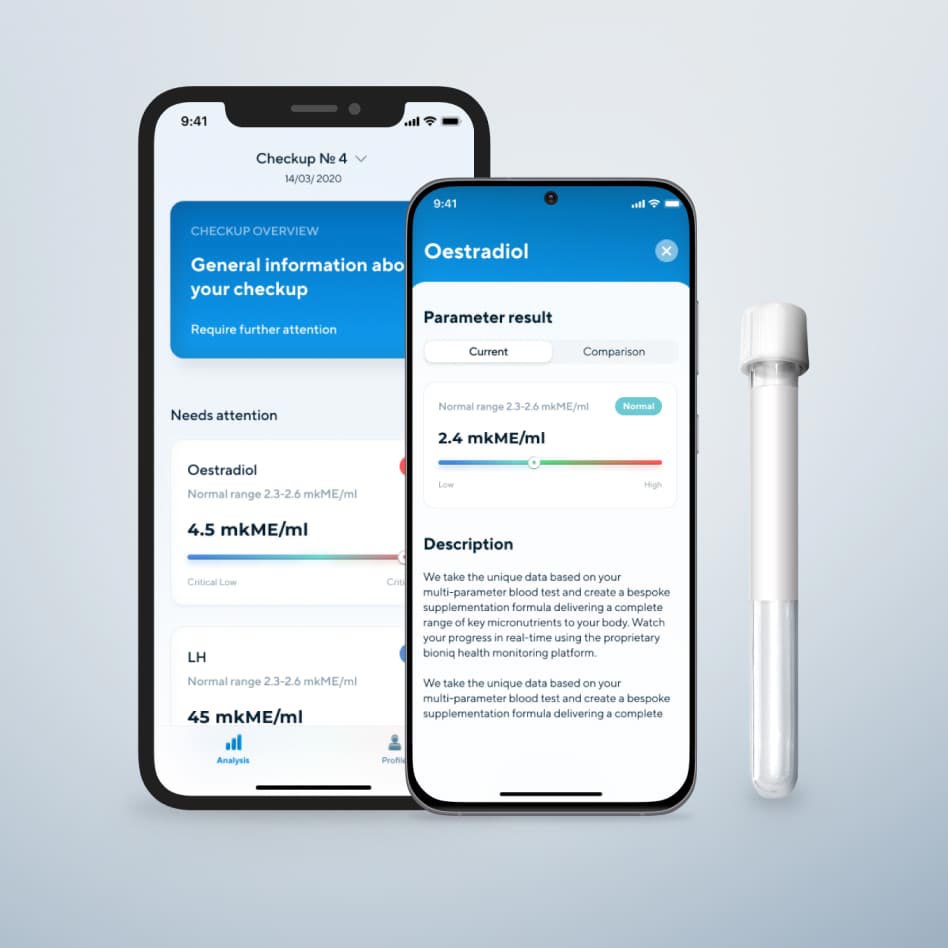 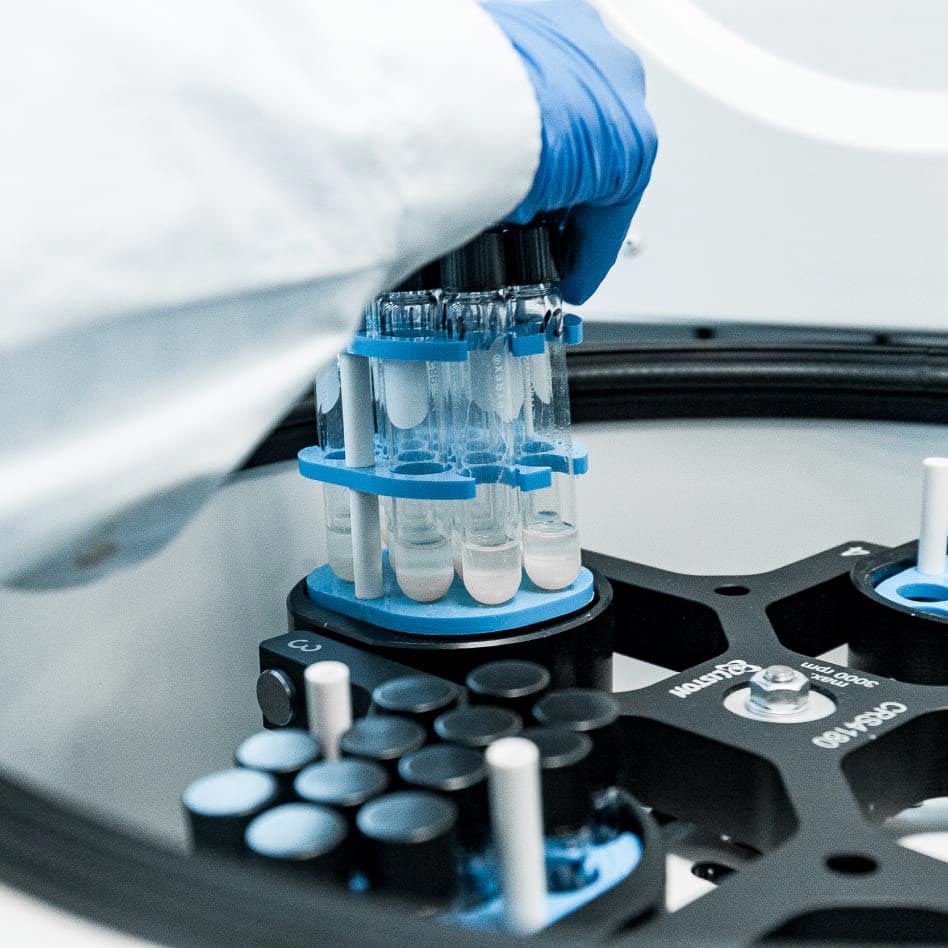 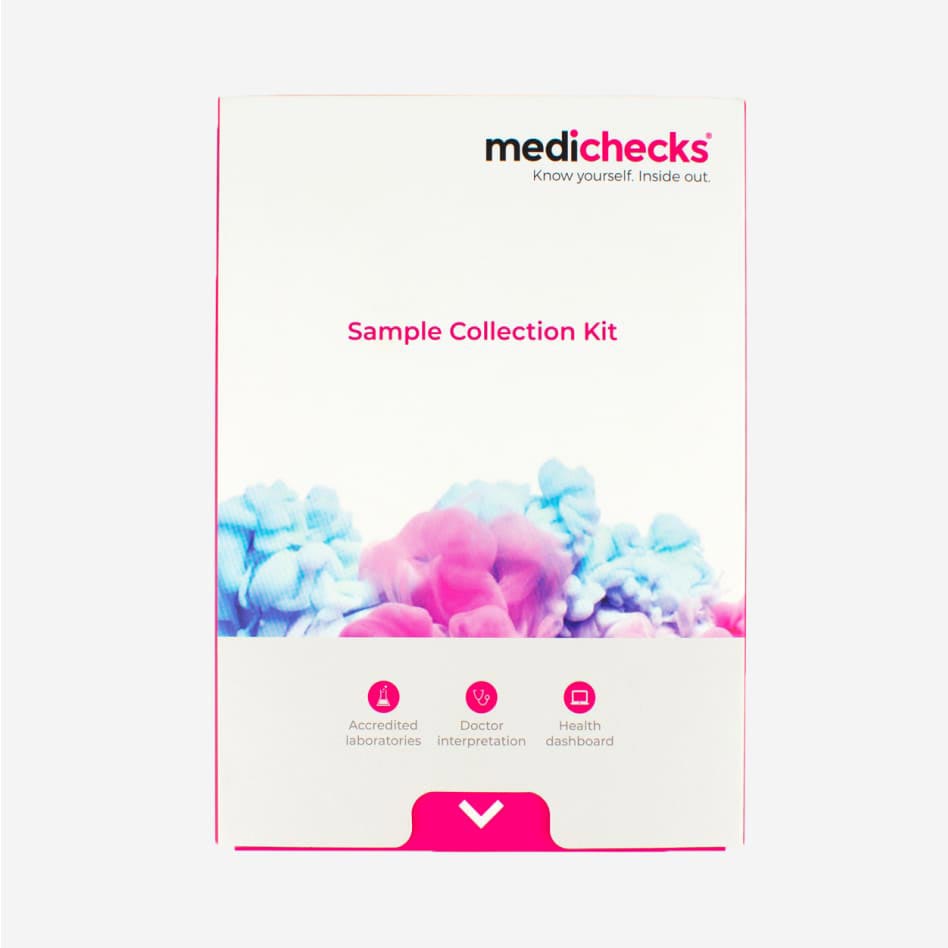 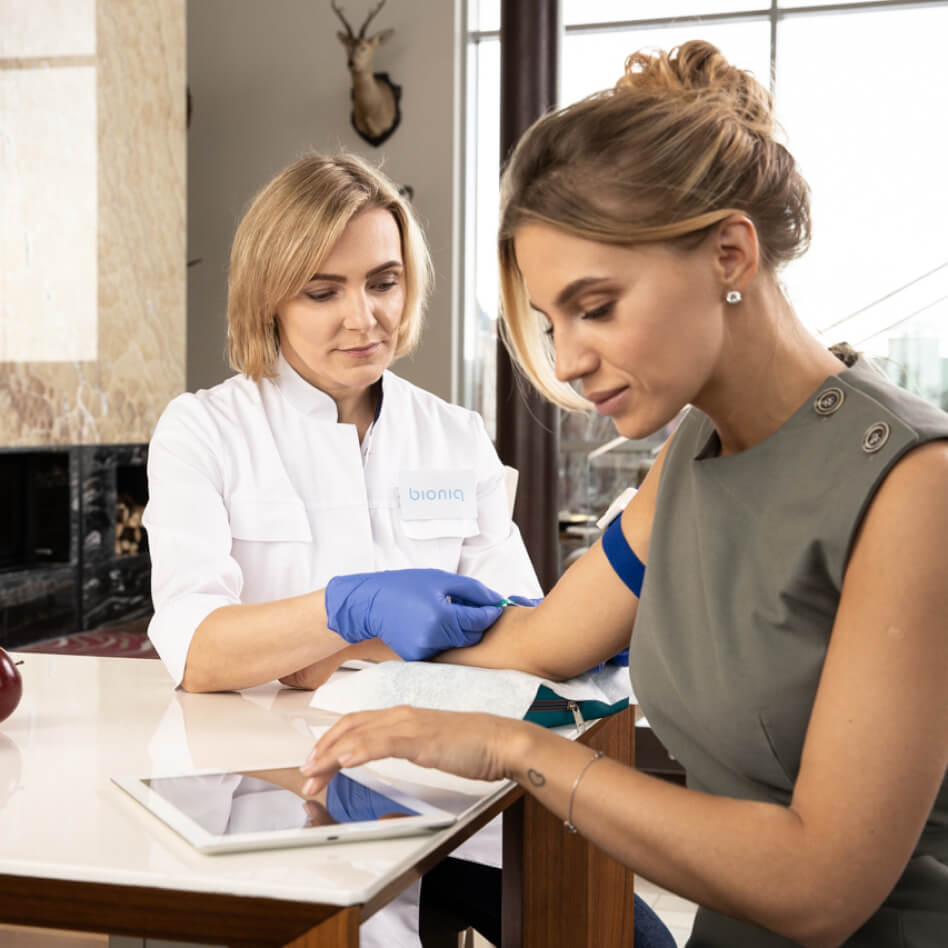 Get ready for the test

To provide our clients with the best blood sampling services, we have partnered with Medichecks — the leading laboratories since 2002

See all locations (Not determined)

Track your health on the go 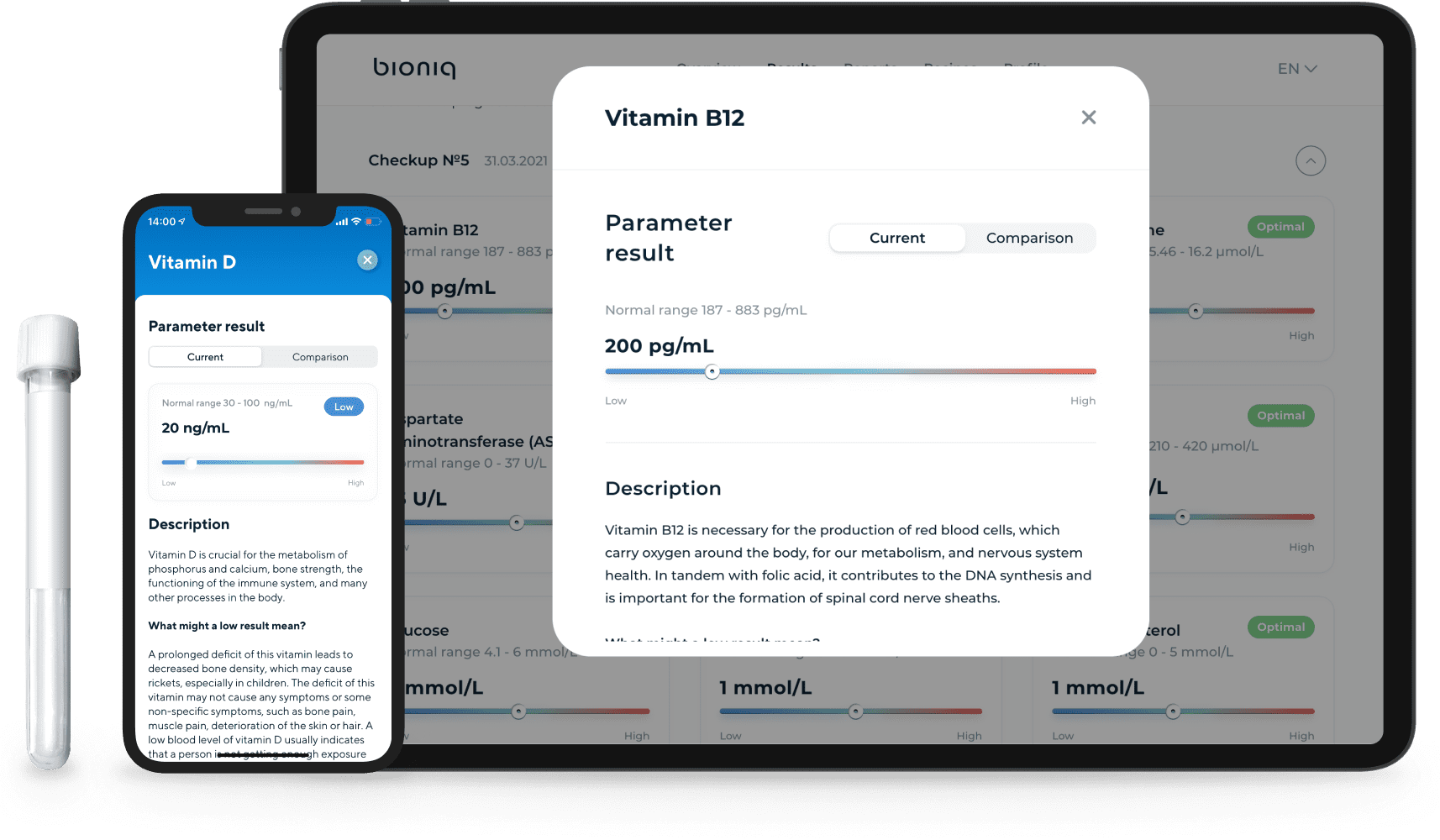 Which blood sampling option is better for me?

To collect your blood sample, you can choose either

Is there an e-calendar that clients can access to book nurse visits?

Unfortunately, not at the moment. However, we aim to provide a better experience and are currently increasing booking transparency.

How is blood sampling arranged?

After successful payment, your order will be placed. Our client service sends the data to a partner clinic which assigns a nurse in your area. The nurse will contact you within 2 working days to arrange an appointment.

How to send the blood sample to a lab?

You will receive a prepaid envelope to post your blood sample back to the lab. After the test, your nurse may offer to drop it in the post. Please ensure that your sample is posted on the same day as your test, as soon as possible.

What’s the best time to take a blood sample?

Please, take your sample as soon as possible after waking. For additional information, check the Get ready for the test section.

A randomised study by a board-certified Prof. Andrew Martusevich, PhD in Medicine and Biology of 314 bioniq users. Published in the peer-reviewed Journal "Archiv Euromedica" (Germany).

The study shows that there was a significant improvement of the iron plasma and total blood level as well as the ferritin level after taking bioniq.
More about our scientific base

Your bioniq concierge will contact you soon
Done
Something went wrong. Please refresh the page and try again

What we test for

I agree
Have a question?

Thank you for your message!

We will get in touch with you as soon as we can.
Done
Something went wrong. Please refresh the page and try again
Clinics